Surgical Smoke Evacuation Guidelines: Where do We Stand in 2019?

Surgical smoke safety is a growing concern in perioperative care. Without stricter regulatory action from the Occupational Health and Safety Administration, otherwise known as OSHA, hospitals and surgery centers have stepped in to create safer ORs with surgical smoke safety guidelines.

According to a report from KSL Radio, healthcare providers in Utah are taking seriously the hazards of surgical smoke. Subsequently, hospitals across the state have instituted their own surgical smoke procedures.

These bills have helped motivate hospital administrators to equip surgical teams with the tools necessary for building a surgical smoke evacuation system.

Compliance with Center for Disease Control

While these policies may not have the teeth of a federally-mandated OSHA standard, they do offer appropriate guidelines for the safe evacuation of surgical smoke in the operating room.

Having a smoke evacuation policy helps perioperative professionals identify hazardous sources of surgical plume (even when it is not visible), set-up effective engineering controls, and maintain sterile conditions in the operating room. These guidelines are meant to mitigate risk according to level of efficacy, as determined by the CDC Hierarchy of Hazards

According to the CDC Hierarchy of Hazard Controls, the most effective solutions for threats to occupational safety is elimination or substitution of the source of the hazard. Unfortunately, this is not possible in the case of surgical smoke, as plume-generating electrosurgical devices are essential to many life-saving procedures as well as an array of cosmetic surgeries.

The next highest degree of hazard control, also called “engineering controls” facilitates containment and filtration of surgical smoke. The goal of surgical smoke evacuation engineering controls is to prevent dispersal of cautery plume into the perioperative environment. These are the most critical infection prevention controls as they help change the way perioperative professionals work in order to reduce and mitigate exposure, rather than simply ventilating and filtering surgical smoke.

Next are Administrative Controls. These are the enforceable policies and procedures maintained by various facilities to ensure internal best practices and compliance. For example, there are few surgeries in ophthalmology that generate large amounts of smoke, however, many eye centers have smoke evacuation policy for any procedure that involves a papilloma. While these may not be the most common procedure, it is still important to maintain the highest degree of hazard mitigation when working with infectious aerosols.

How Dangerous is Surgical Plume?

According to the Center for Disease Control, there are numerous hazards related to surgical plume. In addition to the irritation and illness the noxious fumes cause for perioperative professionals, studies have identified infectious virons. Perhaps of greatest concern is the presence of HPV virons

“Transmission of human papillomavirus (HPV) through surgical smoke from lasers has been documented. Over one-half million healthcare workers including surgeons, nurses, surgical technologists, and others are exposed to surgical smoke each year.” (CDC)

Even more troubling, the CDC found that fewer than half of electrosurgical personnel are equipped to manage surgical smoke hazards. Less than half of respondents in a CDC study reported that Local Exhaust Ventilation (LEV), was utilized during procedures that generate surgical smoke in their facility.  Similarly, only 49% of respondents working in the field of laser surgery said that they received any training or information regarding the hazards of surgical smoke. Fewer than 1/3 of laser and electrosurgical personnel included in the study said that “their employer did not have standard procedures addressing surgical smoke hazards” (CDC).

“If surgeons aren’t complaining, it must not be a real issue!”

While Surgeons are often exposed to surgical smoke under similar conditions to the rest of the perioperative staff, their shifts in the OR are not usually as long, nor are they typically served consecutively. Conversely, OR Nurses, surgical techs, anesthesiologists, and other perioperative professionals are exposed to surgical smoke for much longer periods of time and on a more regular basis. Some scholars posit that this is the reason OR nurses experience respiratory illness and infection at a rate twice as high as the national average.

Still, more than 90% of respondents in a CDC study indicated that surgical masks were the only form of surgical smoke hazard prevention used in the OR, which is insufficient to protect against respiratory illness.

“The n95 mask is sufficient personal protection in the OR.”

The least effective hazard control relates to Personal Protective Equipment (PPE). Ironically, this is the first place many people turn when considering how to protect surgeons and nurses. “Isn’t that what the mask is for?” is a common refrain from non-surgical personnel. This is a dangerous misconception about the hazards of cautery plume

Although PPE is an important feature for the sterility and safety of the operating room, the do not offer adequate protection from ultra-fine particles, which have been shown to cause cancer. Masks cannot filter out the active virions and bacteria that are carried in the smoke either. Unlike fluid contaminates, vaporized or particulate matter is small enough to go through masks. 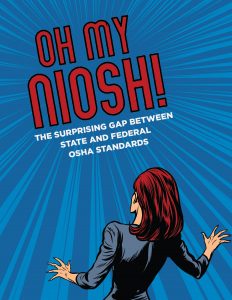